Chylothorax and Use of Human Milk

Chylothorax and Use of Human Milk

“Your baby cannot have your milk.” Imagine hearing those words from your infant’s health care provider. That was the sentence that started “Bobby’s Dairy: Nursing a Baby with Chylothorax,” an article published by La Leche League in 2003.

Chylothorax is a life-threatening situation in which chyle leaks from the patient’s lymphatic system and accumulates in the thoracic cavity. The pressure caused by this accumulation can cause severe cardiorespiratory compromise.

What causes this to happen? Chylothorax in infants can be congenital or acquired through trauma or surgical injury. Congenital cases are estimated at 1 in every 5,000 – 10,000 births; acquired cases are usually related to an accidental surgical injury of the thoracic duct, an infrequent complication which affects about 1.3 – 2.5% of patients undergoing surgical repair of congenital heart disease (Lessen, 2009 and Gilhan et al., 2015). Such was the case with Bobby, who developed chylothorax due to an injury that occurred during open-heart surgery to correct a congenital defect when he was three months old.

While severity of chylothorax differs, affected infants usually have tubes placed to drain the chyle and to prevent respiratory failure due to pressure of the chyle on the lungs. In addition, a stepwise feeding protocol is often followed to reduce the production of chyle:

1) stop enteral feeding; 2) provide parenteral nutrition; and 3) resume enteral feeds, by mouth or feeding tube, using a formula that contains medium-chain triglycerides (MCTs) as the fat source (Conchiero-Guisan et al., 2019). MCTs are specifically chosen because they help minimize the production of chyle, and it was for that reason that Bobby’s mother was told that her child could not have her milk – while MCTs do not contribute to chyle production, long-chain triglycerides (LCTs) do, and human milk is very high in LCTs.

LCTs in human milk are an excellent source of nutrients and have many beneficial qualities, but as they increase chyle production, LCTs are not suitable for infants with chylothorax. The reason lies in the way our bodies digest fats. LCTs are absorbed in the intestine, enter the lymphatic system as small lipoprotein particles, and then are transported to the general circulation through the thoracic duct. MCTs, in contrast, are transformed in the intestine and move directly into the blood system, thereby bypassing the lymphatic system and minimizing the rates of production and accumulation of chyle. (Likewise, parenteral feeding, the second step mentioned above, has a similar advantage, as it delivers nutrients directly into the bloodstream, also bypassing the lymphatic system.) In summary, the nutritional plan – using MCTs instead of LCTs – works with our innate digestive processes to limit the amount of chyle produced.

However, cardiorespiratory issues are not the only risk for the infant with chylothorax. Because chyle contains fat, proteins, electrolytes, fat-soluble vitamins, immune system elements, and other important substances, the loss of chyle through leakage and subsequent drainage can put the infant at increased risk for malnutrition and infection. This is compounded when the infant is recuperating from surgery or other issues and requires extra nutritional and immune support.

During his time in the hospital, Bobby’s mother noted that Bobby had impaired wound healing and had become septic and wondered if her breast milk could help. She knew that in contrast to MCT formula, human milk contains important immune components, which her baby clearly needed. Fortunately, human milk can be processed to remove LCTs, through the separation and skimming of the fat component, allowing infants to be fed human milk without stimulating lymphatic flow.

At the time, however, skimmed human milk was not readily available. Through La Leche League connections, Bobby’s mother read about another woman who had used an inventive solution to skim her milk, using a top-loading washing machine as a centrifuge! Bobby’s parents decided to try it as well. They rigged up a system in their washing machine, and after some experimentation, found that the rapid spinning isolated the fat layer, and after this layer was removed, the remaining milk was tested and deemed acceptable for use. An alternative, even more low-tech way to produce skimmed milk is to leave expressed milk undisturbed in the refrigerator for 8-12 hours; the fat will congeal on top, and a syringe can be used to siphon out the fat-free portion underneath. The skimmed milk is allowed to sit again several hours; the siphoning process is repeated if any additional fat is seen. One caveat is that complete removal of LCTs by this method cannot be guaranteed (Lessen, 2009). 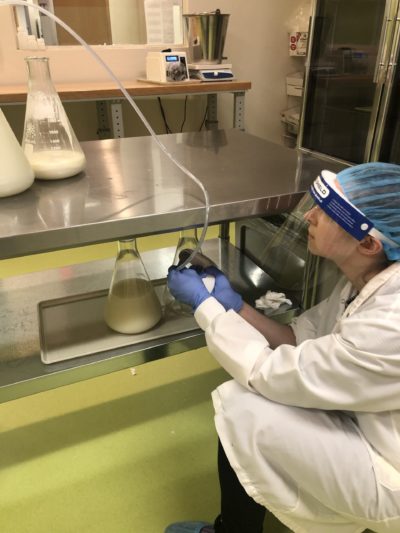 Strides have been made since Bobby’s mother put her milk through the spin cycle, and skimmed human milk is now more widely available. Milk banks and hospitals use a cold centrifuge process and other fat-removal techniques to produce batches of skimmed human milk; families can also be given a centrifuge to produce skimmed milk at home, which is what Bobby’s parents eventually did. As a recent review asserts, “procedures for skimming human milk are simple and could be easily integrated alongside present milk bank activities” (Conchiero-Guisan et al., 2019).

Studies to date have used different means of defatting milk, and different means of fortifying afterwards. Causes of chylothorax, gestational age, physical conditions, and general health vary as well. More study is needed, but the consensus is that skimmed human milk with fortification provides good nutrition and enhanced healing in chylothorax. Human milk not only has important immunological features and hormones for growth and development, it is also cheaper and more readily available than specialized formulas. When possible, consideration should be given to modifying human milk for feeding chylothorax patients (Lessen, 2009).

Cardiorespiratory – pertaining to the heart and lungs.

Enteral – through the gastrointestinal (GI) tract.

Lipoprotein – composed of fat and protein.

Parenteral – through the veins.

Septic – to have a widespread, potentially life-threatening infection.

Thoracic cavity – the chest area containing the heart and lungs.

Thoracic duct – a major vessel of the lymphatic system.