For most people, spring is a time of hope and renewal, but for the past three years, spring has been the hardest time of year for me.  In April of 2019, my firstborn daughter, Elizabeth, passed away sixteen days after her second birthday.  In March of 2020, my second daughter, Cecilia, was diagnosed with a very rare genetic disorder causing blindness and kidney disease.  Shortly after her diagnosis, Cecilia had oral surgery to release her lip and tongue ties—a surgery which caused a breastfeeding strike that has lasted to the present day.  And finally, in May of 2021, Cecilia has lived past sixteen days after her second birthday, creating the surreal reality that I have now known Cecilia for longer than I knew Lizzy.

I have been pumping exclusively now for fourteen months (click here to learn more: The Legacy of Persistence, Breastfeeding Today December 2020), watching my supply rise and fall with my stress levels and quantity of sleep.  Throughout this past year, my supply has slowly dwindled to the point where I have finally made the decision to stop pumping.  For many mothers, deciding to wean is an emotionally laden decision.  For me, it adds a new dimension to an already complex grief.

Because I am a single parent, deciding to stop breastfeeding—even the mechanized, impersonal form facilitated by a breast pump—involves not knowing if I will ever breastfeed again.  It also means letting go of the immunological safety blanket that my breastmilk has provided for Cecilia, who needs the highest quality nutrition to optimize her current eye and kidney function for as long as possible.  And finally, it means saying goodbye to Cecilia as a baby and graduating her to cow’s milk and big-girl cups.

A Mother’s Birth and Rebirth

I have been a mother for four years, but I have never mothered a child past the age of two.  Cecilia was born a month after Lizzy died, so the past two years have felt somewhat like I was living my life on repeat.  When Lizzy was born, I felt like I was born also—like I became the person I was always meant to be in becoming her mother.  When she died, I felt I died too, because there was no possible way I could exist in this world without her.  With everything inside of me, I needed and wanted to follow Lizzy, but Cecilia kept me anchored to this world.

When Cecilia was born, I felt myself reborn in her—not with the same euphoric innocence I felt at Lizzy’s birth, but rather with a visceral and aching need for this little creature who so desperately needed me in return.  And then, at four months of age, Cecilia needed glasses; at eight months she was blind, and at eleven months, she had cystic kidney disease.

But through this all, we had my milk.  For a full year, we had nursing to retreat to after phlebotomists and electroretinograms and ultrasounds.  We had the sweet solace of curling up together in bed to nurse and fall blissfully asleep after the white exhaustion of eight hours spent at the hospital. When we lost breastfeeding following her oral surgery, I spoon-fed her my half-frozen milk to soothe her aching and bleeding mouth. And when her fever spiked during a rough case of roseola, and I feared she would die just like her big sister, I gave her bottles of my chilled breastmilk and held her and sang to her until the fever broke.

I suppose I could say that for more than half of the time I have been nursing Cecilia, breastfeeding has been broken for us.  But after the first few months, pumping didn’t feel broken anymore; it felt like I was doing the most I possibly could do given the situation I found myself in.  It felt like I was doing something real in the face of everything that was unknowable. And now, in saying goodbye to pumping and therefore even to the shadow of what breastfeeding once was for us, I find myself grieving everything that it has been.

I started breastfeeding because of the proven health benefits, but like so many mothers, I continued breastfeeding because it became the fundamental way I engaged in the act of mothering.  I found it was essential to how I loved my daughters and met their needs. Eventually, it would become the primary way through which I learned to love them, and they learned to love me.

I have thought for a long time about the role of bonding in breastfeeding and spent an inordinate amount of time on PubMed exploring my hypotheses.  As a result, I could cite twenty studies on the roles of oxytocin [1] and prolactin [2] in facilitating mothering behavior in mammals. [3]  I could list the neurodevelopmental [4] and psychological [5] benefits of breastfeeding to the developing brain [6] and a 2018 study [7] that found that breastfeeding mothers have stronger cardiac vagal tone modulation, reduced blood pressure, reduced heart rate reactivity, reduced cortisol response to social stress, deeper and longer sleep, and heightened emotional stability.  I could emphasize how a study [8] published in 2017 found that longer breastfeeding durations (through age 3) were associated with greater maternal sensitivity [9] towards the child through age 11 or how the effects of breastfeeding appear to be dose-dependent, [10] meaning that the longer a child is breastfed, the more the child and the mother mutually reap the benefits. [11]

But, honestly, I’m not sure how much it would matter.  We live in a strangely paradoxical world where we look to science for the answers, and yet most of us rely on others to translate this science for us.  Moreover, there are some things which science is only now “discovering” that the human heart has known for far longer.  I think the relationship between breastfeeding and bonding is one of those things.

An article [12] in Breastfeeding Medicine reminds us that breastfeeding is about much more than the transfer of human milk: “An infant suckling at his or her mother’s breast is not simply receiving a meal, but is intensely engaged in a dynamic, bidirectional, biological dialogue. It is a process in which physical, biochemical, hormonal, and psychosocial exchange takes place, designed for the transfer of much needed nutrients, as well as for building a lasting psychosocial bond between the mother and her infant.”

The breastfeeding relationship carries with it a raw intimacy that blurs the lines between the mother’s body and the infant’s body.  Some researchers term this concept “exterogestation”, [13] suggesting that human infants are born far more prematurely than other mammals and therefore require continuing gestation on the mother’s body after birth.  For the infant, the mother is the source and summit of survival; hunger, desire, fulfillment, yearning, thirst, satiation, warmth and rest are all found at her breast and within her arms.  The mother-infant relationship is, thereby, the primordial experience of both loving and of being loved, and the flow of milk is facilitated by this experience of oxytocin-saturated reciprocity.

“My milk ran in rivers/your mouth a sweet need.” These are two lines from the eulogy I wrote for Lizzy’s funeral. From the first, primal moments I held each of my daughters, we forged our connection through blood and milk. As they grew, I was able to teach them words like “gentle” at the breast, imparting an implicit code of conduct.  Often, it seemed we nursed one another to sleep, while our biological clocks ticked in perfect time to a metronome that only we could hear. The breast was a place for laughter and tears alike: a place where Lizzy, grinning hugely, would perform acrobatic feats while nursing, and a place where Cecilia would tap first on her glasses and then on mine, learning through touch that her mama also needs glasses.

When Lizzy was alive, friends and strangers alike would remark on how joyful we seemed together, and I would laugh and tell them that Lizzy is the best thing that ever happened to me. Now, nurses and grocery store clerks point out how much Cecilia seems to love her mama, but I don’t tell them my story or the role I believe breastfeeding played in it. I simply hold Cecilia closer, kiss the soft gold of her hair, and respond quietly that Cecilia is the light of my life.

They don’t know that Lizzy is also my light, shining from a place beyond flesh and stone, illuminating the way home for me. They don’t know about Cecilia’s kidneys or how I spent the first two years of her life waiting for her to die.  When people wish Cecilia a “Happy Birthday”, they don’t realize that I can never celebrate Cecilia’s life without remembering Lizzy’s death. And this year, when the spring caused flowers to bloom and the sun to return, no one understood that I was quietly despairing about my capacity to be a mother.

Because of her blindness, Cecilia was gross motor delayed for most of her life.  Her visual and physical therapists believed she would need a pediatric belt cane to begin to walk.  But one week before she turned two, Cecilia walked several giggling steps into my arms.  Now, she is 25 months old and walking everywhere—without a cane.

We went back to the hospital one week after her second birthday, and they told me her prescription had worsened and her retinal degeneration had progressed along the periphery. They told me it was critical for Cecilia to wear her glasses as much as possible. I worried about this because Cecilia would only tolerate her glasses during reading time. But that following week, Cecilia started wearing her glasses everywhere—without a struggle.

I’m beginning to think that I can choose to see my life as a series of losses or a succession of miracles.  I can choose to contemplate motherhood after weaning as an adventure rather than a wasteland.  Cecilia began walking against all expectations, and I think that she can survive beyond the statistics and diagnoses that will try to define her. I lost Lizzy in the spring, but both Lizzy and Cece also came into my life in the spring.  And now, Lizzy is my little saint of the springtime, who finds new ways to show Cecilia and me that she is infinitely present—profoundly with us—in the cherry tree that blooms outside our window, in the silence that pools between waking and dreaming, in the very cells that make up our hearts, bones, and marrow.

I think I have been privileged to know these two miraculous girls, my daughters.  I think I’m honored to have witnessed their lives: to have loved and been loved by them. I think I will do whatever is necessary to live up to the responsibility of being their mother. And I believe it is a mother’s gift to be able to find life within death, love within grief, and beginnings within ends. 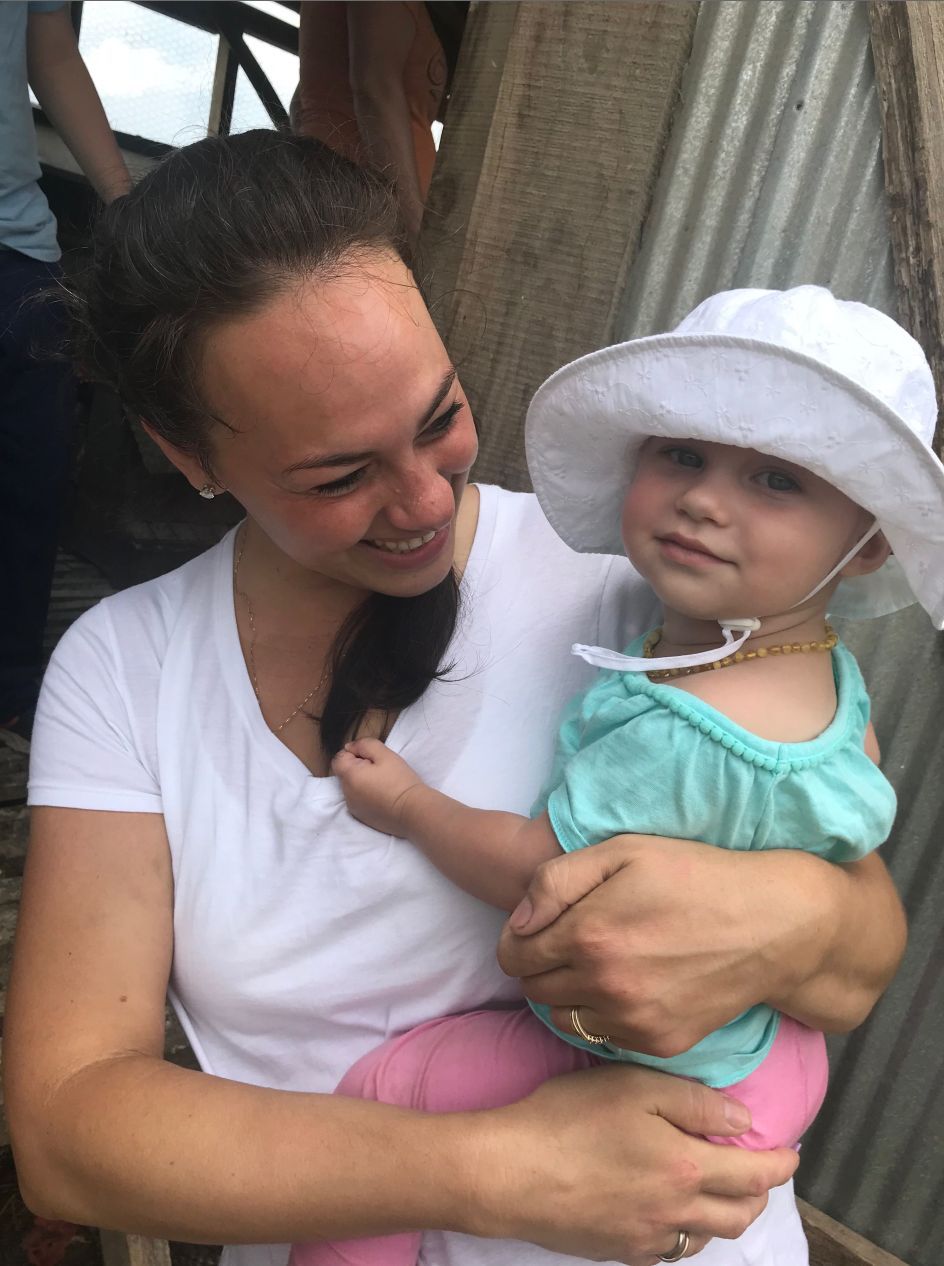 Caroline Herman is a single mother who lives in Rockville, Maryland. She has a background in philosophy and creative writing and a master’s degree in theology. She is accredited as a La Leche League Leader and trained as a Bradley Method Natural Childbirth educator. She authors two blogs – one of these is about Lizzy, Cece, and her experience with grief and motherhood. To read more, please contact Caroline at cherman7@gmail.com