LLL Hosts a Breastfeeding Tent at the Oklahoma Medieval Fair

Sandy Moore-Furneaux and Rebecca Keepers share how running a breastfeeding tent at a popular local community fair proved to be a very successful outreach for La Leche League.

In addition to being a La Leche League (LLL) Leader with LLL of Cleveland County Families in Oklahoma, USA, Sandy Moore-Furneaux is a member of the Norman Emergency Response Volunteers Team (NERVT) in Norman, Oklahoma, as well as a member of the Oklahoma Medical Reserve Corps (MRC). The MRC is a volunteer organization under the auspices of the Office of Emergency Management in the U.S. Department of Health and Human Services. One focus of the organization this year is to support breastfeeding as a means of enhancing public health and resilience in local communities. Being a member of the MRC is very compatible with La Leche League leadership. Sandy is “on call” with the MRC to support breastfeeding mothers in emergency shelters and during the aftermath should a disaster occur in Oklahoma. In turn, the MRC sometimes offers grants that local Groups may receive to develop support in their communities.

In February, Sandy was asked if La Leche League would be interested in hosting a breastfeeding tent at the Medieval Fair on April 1-3, 2016. So the planning began! The Norman “Med Fair,” as it is commonly known locally, was started in 1977 by the English Department at the University of Oklahoma as a celebration of William Shakespeare’s birthday and a living representation of their study of the medieval period. It is great for families because it is one of the few free medieval fairs in the nation. Each year the fair attracts several hundred thousand visitors from Oklahoma and nearby states. 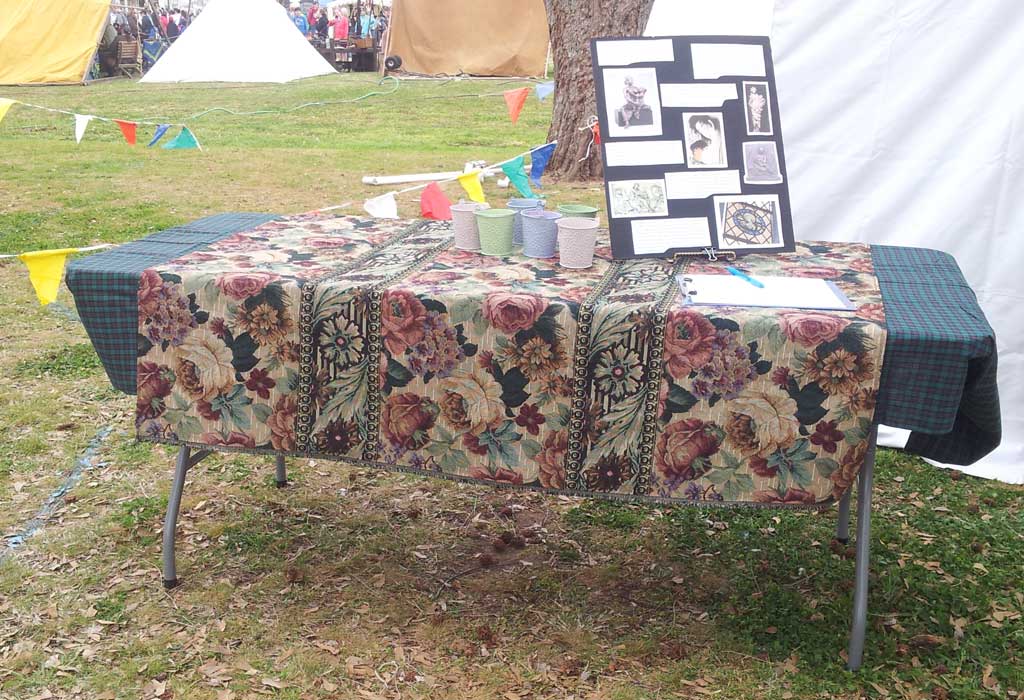 The MRC provided a 10 x 10 ft (about 3 by 3 meters) pop-up tent, tables, chairs, electricity, and a large banner presenting their sponsorship of “La Leche League of Oklahoma” and our website URL. LLL provided woman-power, a medieval art display, breastfeeding information, decorations and several hundred copies of our meeting and contact information. We also set up two clipboards with sign-up sheets for mothers who might have questions or who wanted us to send them meeting information.
Leader Rebecca Keepers brought lovely fabric to decorate the tables and tent and we provided seating as well as a changing table. Leaders took turns to do shifts. We all dressed in medieval costumes to suit the medieval theme and add to the fun of being there. In all, our tent, display, and appearance were very welcoming! Best of all, we offered a quiet oasis where breastfeeding dyads could get out of the Oklahoma sun and wind and concentrate on breastfeeding.

To help mothers focus on their nurslings, Rebecca also set up activities to keep older siblings entertained while mom nursed the baby. These included a simple version of a toss-the-ball-in-the-bucket game and bubbles for the adults to blow for the children, and we had some party-size bubbles to give away. The little ones loved chasing the bubbles. Keeping the siblings happy while baby was nursing went a long way to making our tent a happy and successful experience.

Breastmilk was considered a magical fluid akin to blood, and it was believed that breastmilk could transmit both physical and psychological characteristics of the mother or wet nurse. The belief resulted in protests against the hiring of women for wet-nursing, as wet nurses were from lower classes. It was preached that a mother nursing her own child was her saintly duty (Osborn MS. The rent breasts: A brief history of wet-nursing. Midwife, Health Visitor & Community Nurse. 1979a;15(8):302–306. [PubMed]).

Multiple times, older women came up with adult children and announced, “This is my breastfed baby!” Fortunately, most of those adult children grinned, although a few were a bit embarrassed and rolled their eyes! Several times, men of all ages came by to say, “I was breastfed—I was one of 11 children my mother breastfed!” or “All five of my children were breastfed!”  At one point, three older women exclaimed, “We just have to thank you for being here! You all do such fabulous work!”

We also received heartfelt thanks from many current breastfeeding families. Some had tried to sit on the hard concrete picnic table benches to nurse and felt exposed and uncomfortable with so many fairgoers. Others had tried sitting on the dusty grass to nurse and struggled with the never-ending Oklahoma wind that blew dirt in their and their babies’ faces.

Many mothers and families who visited us took a copy of our meeting notice, and 29 mothers signed up requesting specific information about meetings or about their concerns. Best of all, the tent was occupied with nursing dyads much of the time on Saturday and Sunday.  Overall, this was a very successful outreach with hundreds of people looking at the displays of breastfeeding in the medieval period as well as the current information. We counted at least 746 visitors.

Invitation to return next year

The invitation from the MRC to staff the tent was a fantastic chance to provide a service to breastfeeding families and give positive LLL exposure to the crowds who attended the very popular three-day Medieval Fair. We took notes and look forward to next year—yes, we will participate! Next year we have been promised a bigger tent and more publicity! We are going to add to the displays and strengthen them to withstand the wind, too. With more time to plan, we hope more Leaders will be involved in the fun!

Oklahoma Groups and Leaders who supported this outreach effort:

Archaeological researchers have found that infants who were breastfed were more likely to survive and thrive. Evidence from bones found in a medieval Yorkshire village reveals that breastfeeding protected infants from otherwise-expected high levels of mortality. While breastfeeding continued, the babies grew as well as today’s babies. With complete weaning, which generally occurred after 18 months in the village, children revealed evidence of high rates of malnutrition and disease and an increased incidence of stunted growth. telegraph.co.uk

Sandy Moore-Furneaux and her husband, John, a physicist, have a blended, multicultural and multi-faith family with six adult children, all of whom were breastfed, and six grandchildren, also all breastfed. Sandy has been a Leader for nearly 25 years. She is currently the Coordinator of Leader Accreditation for La Leche League of Kansas (and Oklahoma), is on the LLL USA Social Media Team, and is a member of the Global Leaders Council. She still works with La Leche League of Cleveland County Families, the local Group in Norman, Oklahoma, USA.

Rebecca Keeper is a founding Leader of the Mustang/Yukon, Oklahoma La Leche League group, Rebecca Keepers has now been a Leader for thirty years. She and her husband Glenn have two grown sons. Rebecca has served as Chapter Leader, Area Leaders’ Letter Editor and has been a presenter at LLL Area Conferences.