On Becoming a Grandma

Originally published May 2016, republished here with the express permission of the author.

I am about to embark on a great adventure—one that not just anybody can experience. The eligibility criteria is based on choices I made decades ago, combined with choices made more recently by others. My choice—and success—at having babies years ago set this adventure in motion, and my daughter’s choice—and pending success—at having a baby of her own completes the criteria list.

What is a grandma anyway? Part genetic continuation of the species, part sharer of great—and not so great—wisdom, part whimsical fun, and part exhilaration in having lived long enough to see my daughter marry her childhood sweetheart and carry the next generation to term.

I know that I’ll be the grandma of a little boy—Grayson Alexander Ethan Graf. I know—or have been told, anyway—that Grayson is an active little fellow. I know that he is already loved by his Mom and Dad, and I know that I love him as well. And I can imagine playing with this little tyke and rolling around on the floor with him, reading him books, teaching him to cook, watching him take delight in the world around him. And yet these images are but a blur, missing the key ingredient of a shining face. Will he look like Merrilee? Alex? Or maybe his grandparents. I saw my own parents in many pictures of my children when they were young. Or maybe we just see what we want to see, and see those faces we know so well.

And while I can imagine what I might do with Grayson, I don’t know what he’ll want to do with me. What will pique his interest? Snails and puppy dog tails? The dinosaurs standing ready to protect him in his room? The electronic IT world his daddy knows so well? Or maybe the artistic creativity of his mom.

I wish my own parents were still alive to see their great-grandchild—and to see their granddaughter in her new role—and see me in my new role. So much of my parents is embedded in me and my daughter, so perhaps those genes that survive through two generations will become a part of Grayson, too. I hope so!

Right now, the biggest mystery of all is when Grayson will join us on this side of the world. We’re ready, and the calendar says he ought to be ready. Already showing wisdom beyond his age, only he will know when he’s ready to greet us.

Part One of this tale was written in the days just before Grayson arrived; Part Two comes a year and a half later. In a matter of months Grayson will celebrate his second birthday, and I will have two years of grandmotherhood under my belt. 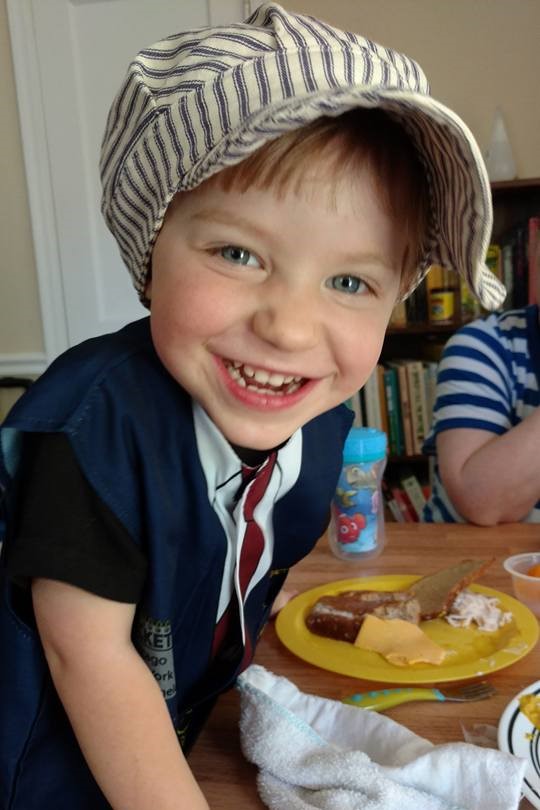 What an amazing journey it has been—for baby, his parents, and his grandparents. Any life experience changes us, but perhaps none so profoundly as the birth of a child. I’ve experienced those kinds of life-altering events with the births of my own children, but I’m not sure I was truly prepared for how my life—how my outlook on life—has changed, all because of Grayson’s birth.

I was lucky to have witnessed the transformation firsthand—I was at my daughter’s side as she brought Grayson into the world. It was a difficult labor and delivery. Long and painful for Merrilee, and while I didn’t actually go through the labor and delivery, in many ways I “felt” her pain and discomfort as only a mother can. She was amazing, however, as was Alex, her husband, close by her side. Together, he and I made a pretty good team, though there were times that I’d have to remind myself to move out of his way to let him be her Number One support.

I got to watch another kind of transformation right after the birth as well. Because of some potential complications during delivery, as soon as the cord was cut Grayson was whisked across the room to be checked over by the waiting neonatologists. Merrilee could only watch from a distance with a grayish combination of fatigue and fear and need to hold her newborn apparent on her face. Alex followed his son across the room, and then back to Merrilee when the okay was given.

As she held her newborn son for the first time, I witnessed life and color return to her face. And clearly Grayson knew he was back where he belonged as well. I helped get him to the breast, where he latched on beautifully—as if he knew he was the grandson of a breastfeeding supporter.

And while I was able to assist this first “reattachment” back to the mom he’d been fully dependent on for nine months, I really can’t take credit for it—anymore than I could take credit for taking two magnets and creating the natural attraction that pulls one to the other. Mom and baby each knew they needed the other, regardless of inexperience.

Those first few months were not without challenges—how can new motherhood not be a challenge? And while my maternal instincts wanted to fix everything for my daughter, my grand-maternal awareness realized that she didn’t need me to fix things for her as much as validate—that she was fully entitled to feel frustration and joy, sometimes simultaneously, and that she held the keys to resolving those challenges for herself. Sometimes the resolution was no more than the realization and acceptance that what she was experiencing was totally normal. There’s a great sense of relief that comes with understanding that your experience as a parent is a shared one with other parents who have gone before you. That’s the stuff that La Leche League has been made of for 60 years!

The grandma role is definitely an interesting one—it’s a balance between unconditional support, gentle nudging, mama bear protectiveness, empathy, and frustration at not being able to just “fix” everything. But it’s worth every minute of it!

A lot has happened since I started this “travelogue” of my journey as a grandparent. Not only do I revel in my relationship with soon-to-be 3 year old Grayson, who now sincerely tells me, “Grandma, I love you!” and has declared that I am his “biggest and bestest friend,” but I’ve learned firsthand that it is possible to love more than one grandchild at a time—much as parents learn that they can learn to love more than one child at a time. Grayson has two cousins, two-month-old twins Lynley McKenna and Emma Grace Vickers. And in the next few weeks, we’ll welcome Grayson’s baby brother Oliver William Edison Graf to the family. 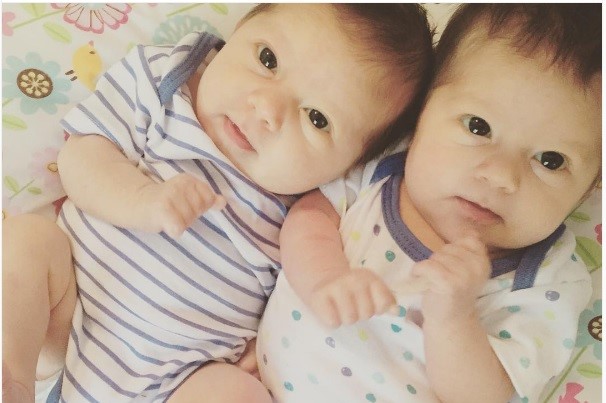 There’s no real surprise that there’s enough love to go around for all these grandbabies. I look forward to watching the three new ones grow, and to building that loving relationship with them that is such a treasure with Grayson.

Since this article first appeared in La Leche League’s Breastfeeding Today, I have had the great pleasure of witnessing the birth of Oliver. Unlike Grayson’s birth in a hospital setting, with a cascade of interventions that added to both the length and intensity of labor and delivery, Oliver was born at home, with an amazing midwife, doula, and me in attendance for a water birth. Merrilee’s husband, Alex, was once again her major support, and even Grayson was on hand (when an assistant doula wasn’t playing with him in the next room). Whereas Merrilee’s first labor was more than 50 hours long, with four hours of pushing before the obstetrician delivered Grayson by forceps, this second labor—with Merrilee surrounded by loving support—was only six hours long with only 23 minutes of pushing. Oliver arrived peacefully and immediately went to his mother’s awaiting arms, and he took to breastfeeding like he had been born for that moment.

I love being a grandma! There is nothing that compares to little hands reaching up for me to hold and hug—and nothing that compares to watching my children (and their spouses) parent my grandchildren lovingly. My only regret is that the twins live 12 hours away (by car), and we see them much more infrequently than we do the boys (who live two hours away). We have been able to get all of the grandchildren together five or six times in the last year and a half, and the chaos that ensues is wonderful. 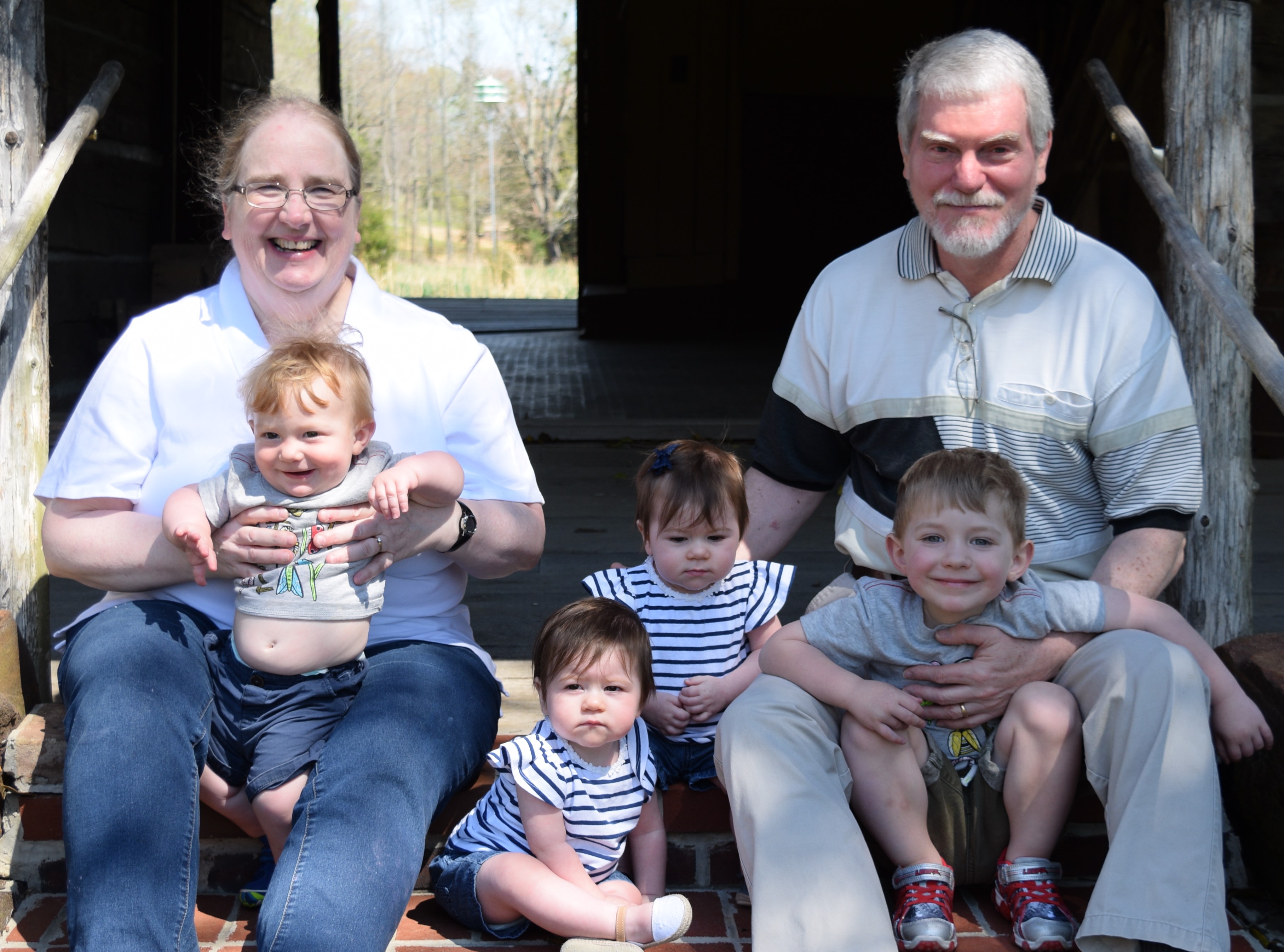 And the Family Grows

The latest addition to the Vickers Clan, Annabelle Graf, arrived recently to join her older brothers, Grayson and Oliver. Another home water birth attended by the same midwife and doula who helped usher in Oliver, and another display of strength and love by my daughter.  Giving birth is a life-defining moment in time—I felt that when I gave birth to my son and daughter. And witnessing the birth of three of my five grandchildren is another life-defining experience—for me, as well as my daughter and her family. My daughter did all the work (they don’t call it “labor” for nothing!), but I’d like to think that those of us there to love and support her—her husband, her children, her birth attendants, and me—helped spur her on. I watched my daughter with alternating feelings of pride and empathy, and more than a few happy tears. I look forward to watching these five amazing grandchildren grow and thrive. Life is good! 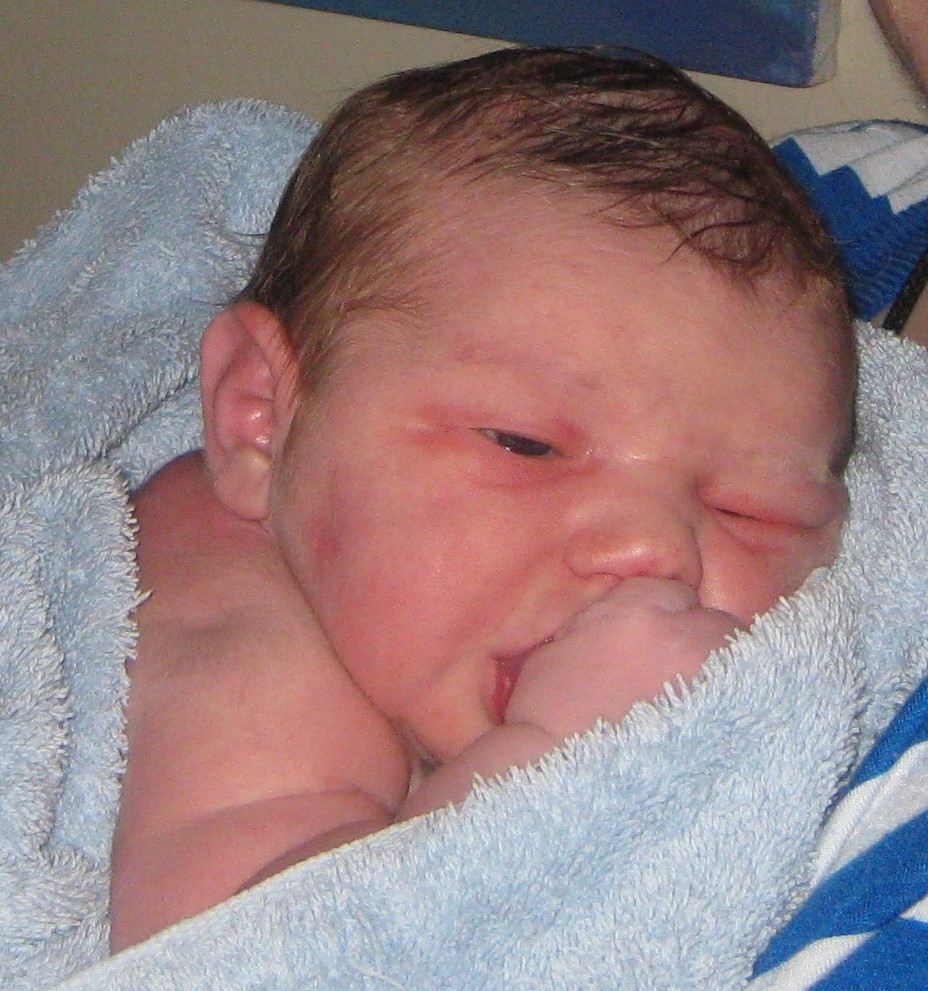 Annabelle, less than an hour old

MELISSA CLARK VICKERS recently retired after nearly 28 years as an LLL Leader. She is the mother of two, grandmother of five, and helps edit the World Alliance for Breastfeeding Action (WABA) Mother Support for Breastfeeding newsletter. She also writes and edits for Family Voices, a non-profit organization dedicated to keeping families  -especially those with children with special health care needs – at the center of health care. She was honored to help LLL Founder Marian Tompson write her memoir, Passionate Journey—My Unexpected Life [2]. Melissa credits LLL for helping her parent according to her children’s needs, and sees that influence moving forward in how her own children parent their little ones.